5 Animals You Probably Never Thought Of Keeping As A Pet

While we’ve probably seen a good number of “normal” pets in our lives, we’re a lot less likely to have come across the scaly, beady-eyed critters that others seem to love just like any other pet. Being around them can be a little unsettling, and touching or holding them even more so.

Still, these animals are just as deserving of being taken care of and loved, and Joyce Yu certainly feels that way. When asked why she had started collecting these exotic pets, she replied: “I liked the idea of having an unusual pet. I think I’m drawn to reptiles and fish because I wanted to challenge the idea that they aren’t as ‘good’ as dogs or cats.”

Ever since I can remember, Joyce has had at least one unusual pet in her home. From the small turtle I remember seeing in her college apartment in Manila, to the snakes hiding in their enclosures in her family home in Cebu, Joyce has always been fascinated with keeping these animals as pets.

Currently, her pets include two common snapping turtles, two corn snakes, blue delta guppies, a savannah monitor, and a leopard gecko. If that already seems like a lot, she has even more– like red-eared slider turtles, other fish, and a few dogs.

Being an animal lover all her life, Joyce has had a childhood dream of going into veterinary medicine, and is set to begin her studies this September. Still, even if she wasn’t going into the vet med field, she doesn’t think she’d have any less pets. “I think that if I didn’t pursue [it], I’d still probably keep a few exotics for myself.” 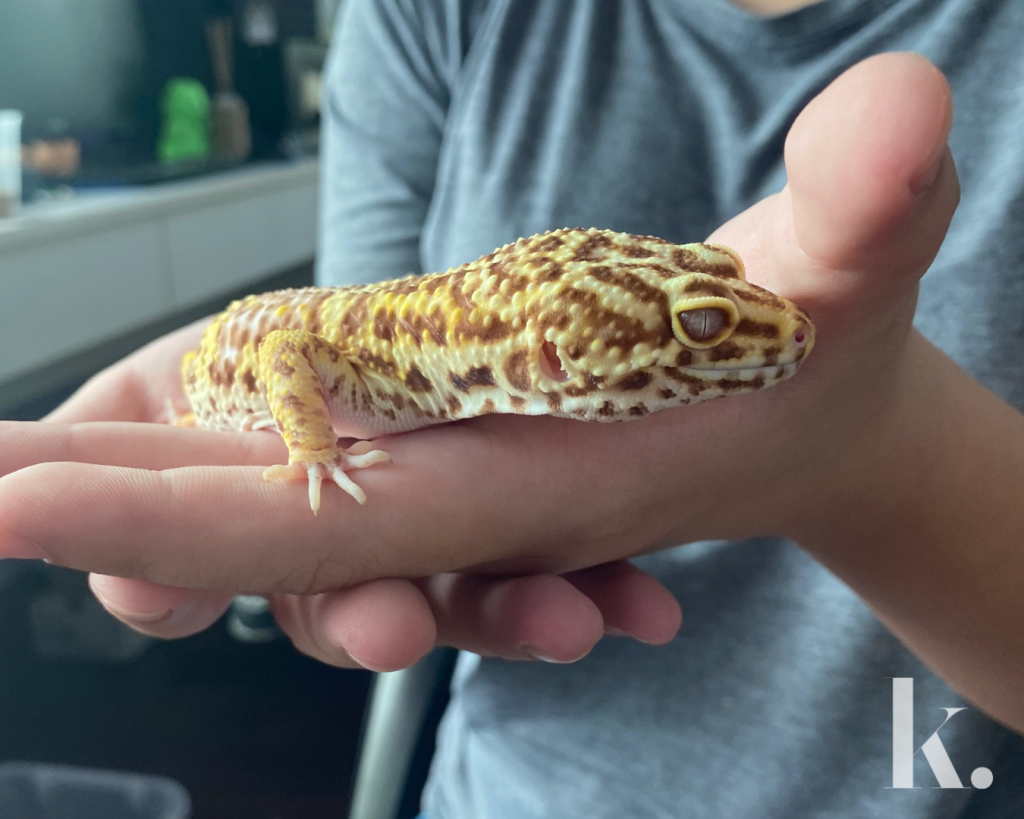 “He’s pretty chill and dumb,” she jokes, holding the two-year-old gecko named Spyro in her hands. His diet consists of live insects like super worms and dubia roaches. An adult leopard gecko can grow up to ten inches long, and even live up to twenty years in captivity.

Leopard geckos are different from other geckos in that their toe pads are not sticky, so they don’t climb up walls like other lizards. These slow-moving reptiles are good as a beginner pet, as they require minimal maintenance and are not very aggressive. 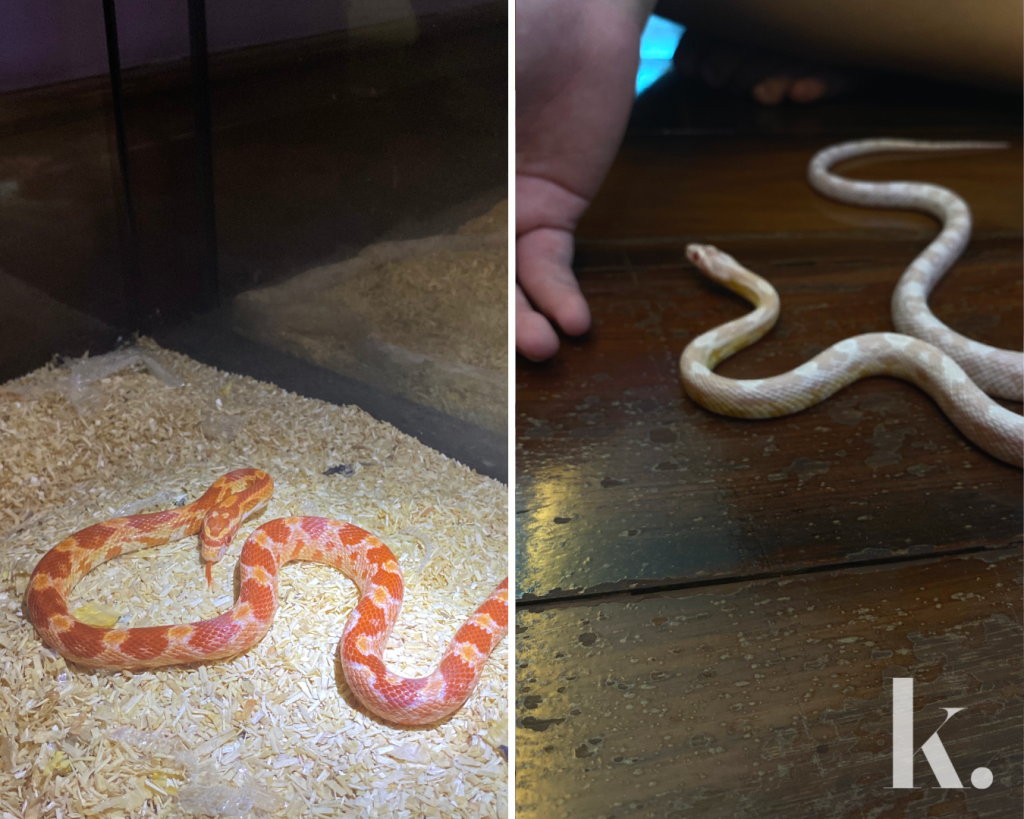 Of her two corn snakes, Palabok (left) is the squirmier one. “She likes chilling in her water bowl.” Joyce feeds them a diet of baby mice. Growing snakes like Palabok should be fed twice a week, but adults can go with feeding only once a week.

Snakes do in fact, drink water, so keeping a clean dish of water is important to help them excrete waste. Plus, they would love to soak in some clean water, especially when they’re about to shed!

These snakes are mostly docile, but are also adept escape artists, which is why Joyce always double checks that their enclosures are locked after feeding time. Corn snakes also like to burrow and hide, so keeping their enclosures filled with a layer of substrate, as well as little crevices for them to hide, is necessary. 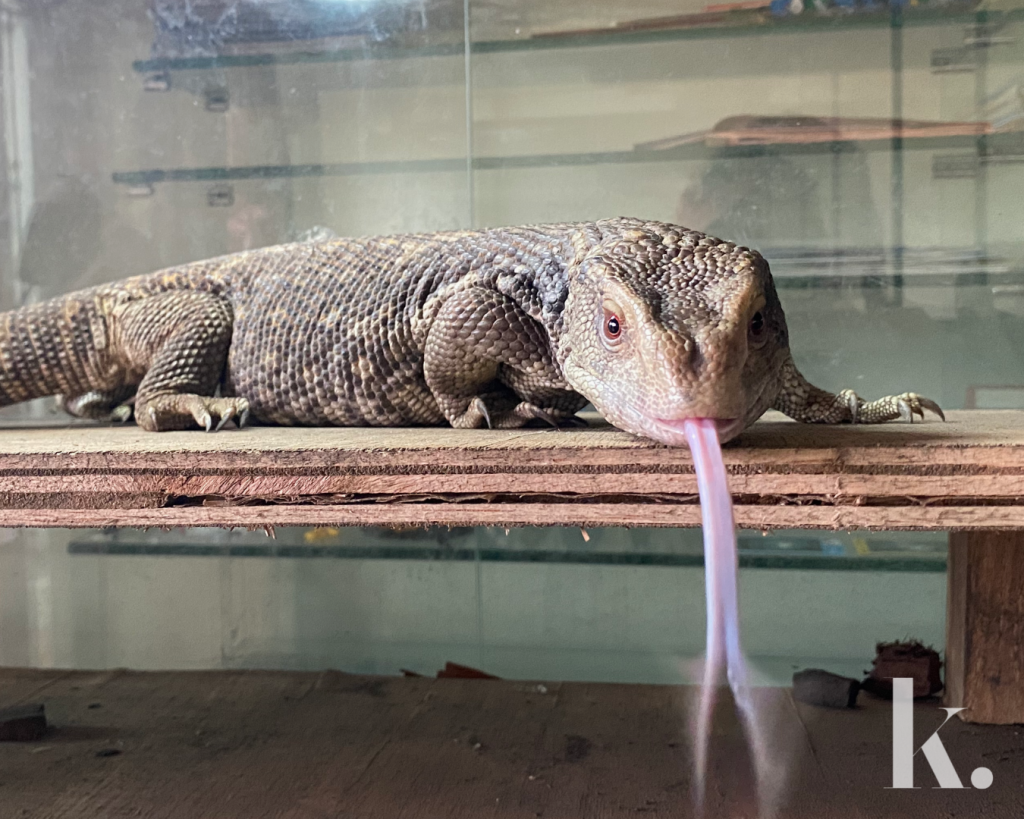 The biggest of Joyce’s exotic pets so far is George. He’s two years old, and quite tame for a monitor lizard. “He likes head rubs, especially when he’s shedding,” she says. Joyce even takes him out on leashed walks in the backyard, which was absolutely hysterical to hear about.

Despite his mild temperament, savannah monitors can have sharp teeth and claws, and have pretty powerful tails, so they should be handled with care. They can also rip through screens, so a glass enclosure would be preferable.

“He eats a lot,” she tells me, explaining that his diet is a mix of mice and dubia roaches, but only eats once a week as the mice can be too fatty for him. Savannah monitors are a lot more high-maintenance than her other pets, and require large enclosures that should be cleaned frequently. They also like to submerge themselves in water, so keeping a dish full of fresh water is important. 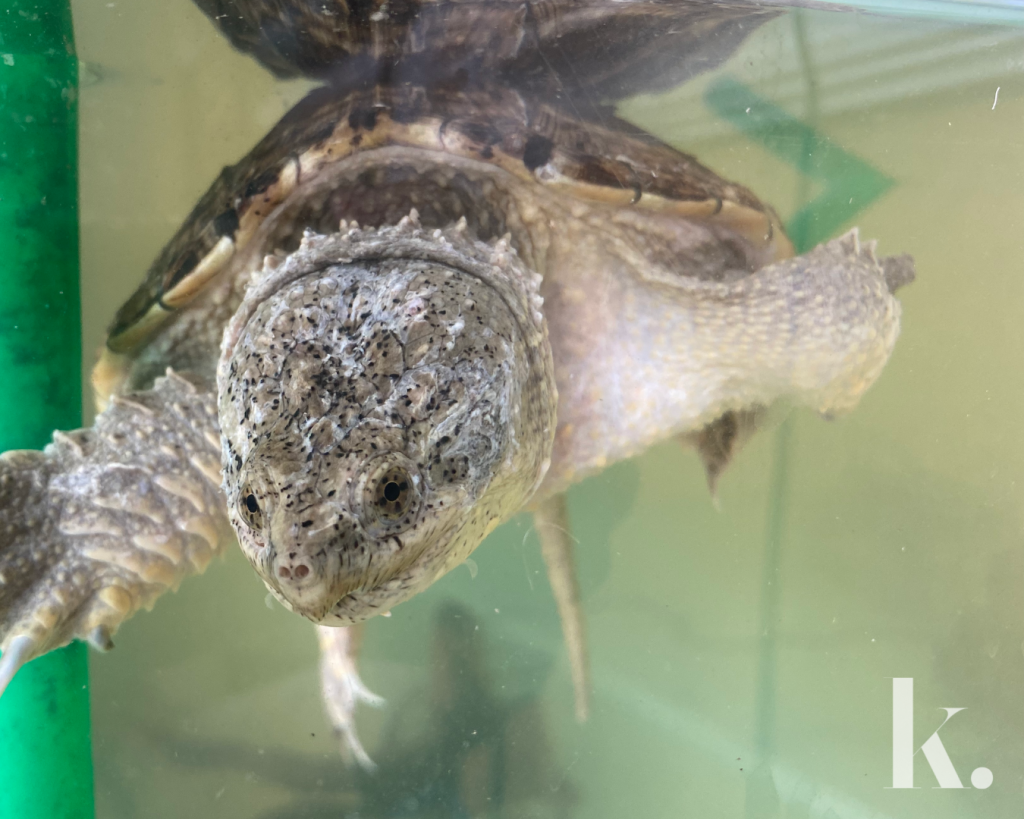 Possibly the most uncommon animal to be kept as a pet in this list, snapping turtles are quite hazardous. Spike, Joyce’s male snapping turtle, is a little more mean than the female, Spot (pictured). “He’ll try to bite you through the glass,” Joyce says. “Spot is the chill one who just sort of floats there until you poke her.”

They eat a mix of live insects, turtle pellets, and some vegetables. Snapping turtles also have very strong jaws that you would not want to slip a finger between, so many owners will recommend that you touch them as little as possible. These reptiles (yes, reptiles, not amphibians) can live up to almost fifty years in captivity as well, which means that you’ll need to make sure someone else can learn how to care for them as you get older. 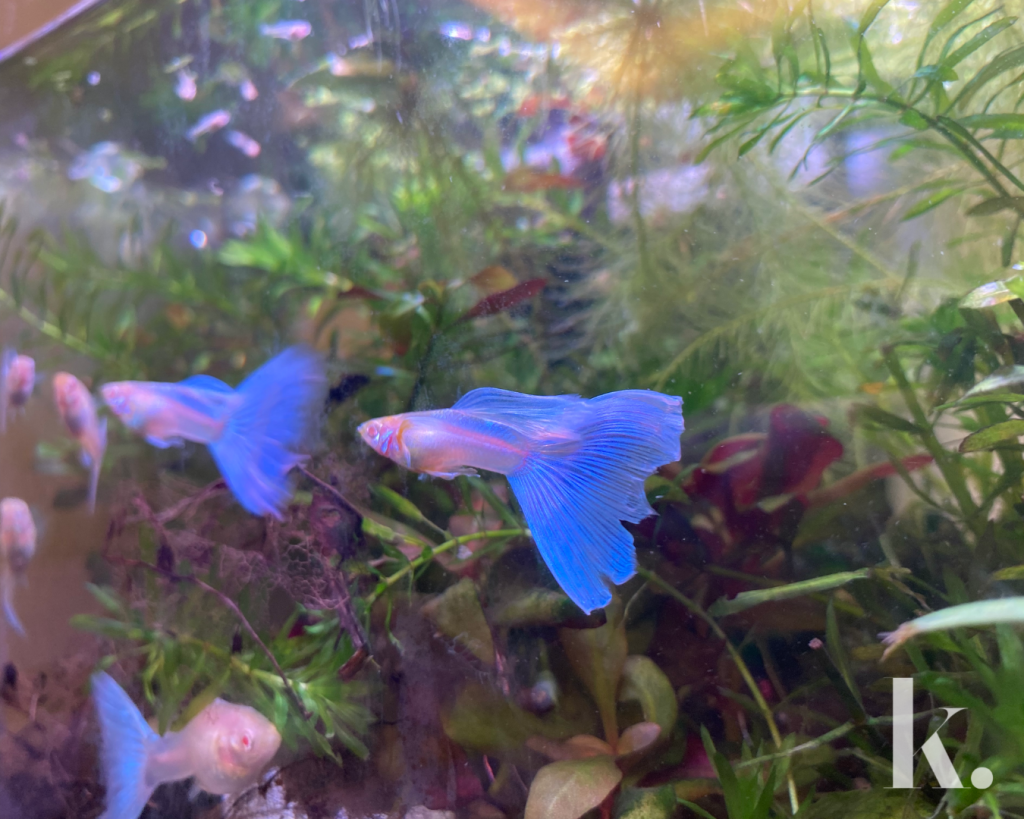 “They’re, you know…” Joyce pauses. “Fish.” Guppies come in a variety of colors, and are a peaceful easy-going species that can do well with other fish in a tank. While they’re a great fish for beginners, it’s important to remember that they would thrive better in larger tanks, as they are very active.

“They like live food like daphnia (small planktonic crustaceans) but they also like fish flakes. When they aren’t being fed, they spend most of their time grazing on plants and algae.” As with most fish, their tanks also need to be kept at a certain temperature and pH level.

Getting an exotic pet

Although there may be others who think it’s not as “fun” or fulfilling to keep these types of animals as pets, Joyce doesn’t really mind. “To each their own,” she shrugs. “Exotics aren’t for everyone, since they have different characteristics. But for me, I also like that they don’t poop as much as mammals do!”

Despite the novelty these pets might have, Joyce urges anyone thinking of getting exotic pets to do their due diligence. What she’s shared so far about these pets is not the be-all and end-all of their care and maintenance.

“Do your proper research! Please, please ask an expert and prepare what you need before getting an exotic pet. Each one requires a different type of diet, different temperature and humidity, depending on their species and origin. And please, be aware of the space and maintenance they require so that they can live healthy, happy lives.”

Joyce also recommends that you get from established breeders with a good reputation. Good breeders will help you learn how to care for the animal, while others only breed for profit without proper care. While you can get some through pet shops, they usually charge high prices and usually procure them through breeders anyway, so it’s better to go directly to someone with proper experience and expertise to help guide you.

They might not be cute and cuddly like cats or dogs, or even rabbits and hamsters, but these exotic pets are still animals that deserve love and care from humans, scales and all.