Hopping to Happy: The Joys of Rabbits

Despite growing up in a home with many dogs and cats, I spent years unable to see myself raising animals of my own. This is most likely due to my mild case of germaphobia which I developed way before the pandemic (I was a serial abuser of isopropyl alcohol before it was cool) and a life-long commitment to staying child- and pet-free. I thought animals were cute but that, like human children, they were too much work. That is, of course, until I discovered the rabbit.

By “discovered”, I mean that my little cousin was gifted four of her own, became obsessed, and then spread her obsession like the flu. She would talk about them non-stop to the family and begged us to get a pair so she could have her regular dose of bunny cuddles in whatever home she decided to visit. She managed to convince my grandmother and my mother, but most importantly, me. Again, I was a firm believer in being pet-free my entire life, so how did a preteen strongarm women 13, 39, and 60 years older than her?

Allow me to persuade you of the joys of rabbits.

If you’ve never touched a rabbit, you’ve never known what soft is. Bunnies have the softest fur on the entire planet, hands down.  No, you cannot convince me otherwise. I spend many, many hours just petting and brushing my bunnies’ fur (when they decide to sit still enough to allow this). Aside from being a human’s tactile treat, their fur also functions as protection from the cold and heat and has some hydrophobic qualities. I have often teased my bunnies, telling them I would attach them to a pole and clean the house with their bodies, but I usually end up rubbing my cheek against their fur, instead. I told you—soft.

Bunnies are some of the easiest creatures to feed: they will eat (almost) everything that grows in the garden. And if you’re not sure? Google is your friend.

My bunnies have an affinity for almost every kind of fruit, but despite the pleas in their little eyes, they should only be given a limited amount each week because fruits are high in sugar. This goes for carrots, too!

Their main diet (around 80%) should be hay like timothy or alfalfa, but if that’s not available to you locally, you can let them hang in the garden to munch on grass all day. Our bunnies’ vet also recommends veggies like water spinach (kangkong), camote tops, carrot leaves, and herbs—all of which can be found in your local market. Super easy! Bonus: rabbit poo and pee are very effective fertilizers, so they essentially grow their own food! 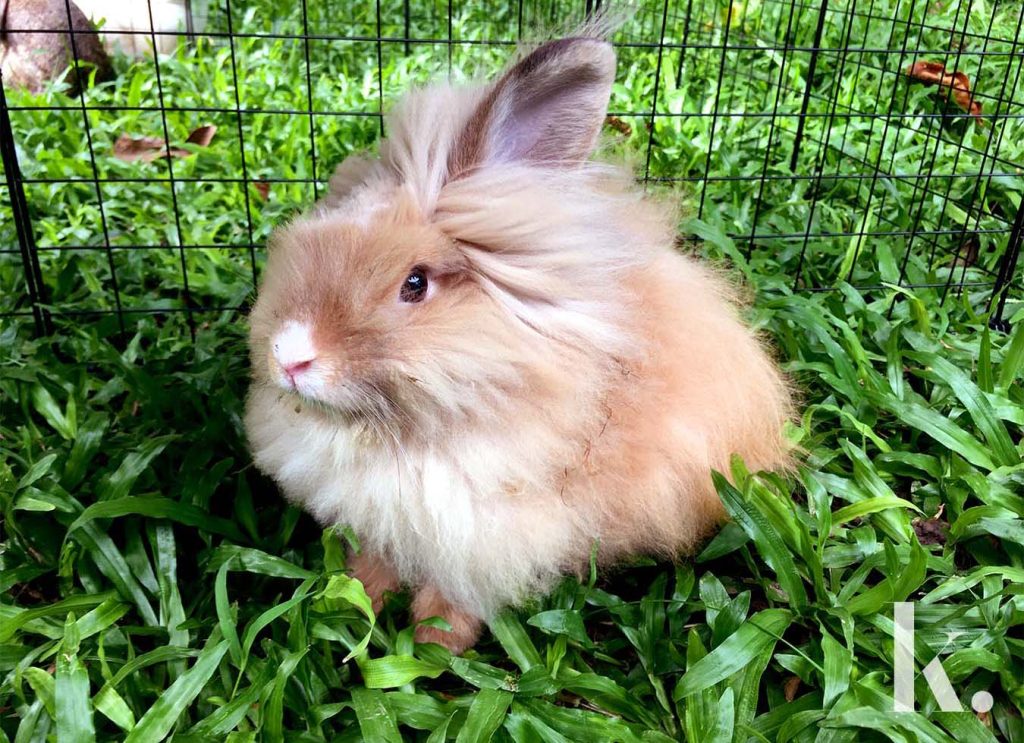 Coming in last, but was the most convincing selling point for me, rabbits are very clean animals! Like cats, they are fond of cleaning themselves. Do yourself a favour and look up “bunny cleaning face” videos on YouTube and die of gigil.

My bunnies like to clean themselves when they wake up, after eating, and even in between naps. It’s no wonder they also have this special bunny scent that’s earthy but also fresh, making you want to sniff them all day long. Because they clean themselves, they don’t need to be bathed apart from very special circumstances, like a bunny unable to clean itself due to old age or disease. Give a bunny a clean environment, fresh water, and loads of hay to see them run around and binky in the air with delight!

Rabbits are truly wonderful creatures that spark joy, but as a prey species, they are still vulnerable to the many harsh realities of the world. The Sumatran rabbit of Southeast Asia and the Riverine rabbit of South Africa are classified as a critically endangered species. Here in the Philippines, while there is a growing interest in rabbits and rabbit-raising, we still see several cases of domesticated rabbits being abandoned.

I’ve spent a little over a year with my little bunbuns and they have opened my eyes to how much personality such tiny creatures can hold. They may not be as popular a choice of pet as their fellow animals, but they are just as deserving of safe and loving homes and the ability to thrive in their natural environments. On this International Rabbit Day, I hope you take the time to consider adopting a bunny of your own or donating to rabbit rescue/conservation programs.

View all posts by Milmosa Cang →